Born: Born on 23rd of January in 1897 in the Cuttack, Orissa Division, Bengal Province, India

Subhash Chandra Bose birth anniversary is celebrated every year with great honour by the people including government and non-government organizations.

As he was one of the most well known Indian leaders during the independence movement, he has become a great legendary figure in the history of India.

It has been demanded by the Netaji’s followers to celebrate his birthday anniversary as a “Desh Prem Divas” in order to re-memorize his great sacrifice towards the country.

Subhash Chandra Bose was a great Indian nationalist and famous by the title Netaji, born on 23rd of January in the year 1897 in the Cuttack, Orissa Division of Bengal Province.

When he was just 48, he got died on the 18th of August in the year 1945. His mother’s name was Mrs. Prabhavati Devi and his father’s name was Mr. Janakinath Bose. His father was an advocate. He was the ninth child of his parents among fourteen siblings.

Later he was expelled from the Congress in the year 1939 and sited under the house arrest by the British. Then he went to Nazi Germany and Imperial Japan for getting assistance for the independence of India by British rule.

He became successful in organizing an Indian National Army with the support of the Japanese. He died because of the third-degree burn when he attempted to escape in the burdened plane of Japanese which got crashed in Taiwan.

Subhash Chandra Bose got admission to the Protestant European School in the month of January in 1902. He then admitted to the Ravenshaw Collegiate School and again to the Presidency College after getting the second position in the matric exam in the year 1913.

His nationalistic character came to his way and he expelled from the Presidency College. After that, he joined Scottish Church College (University of Calcutta) to complete his B.A. degree in philosophy in the year 1918.

He resigned to the civil service job and came to India where he started the Swaraj newspaper for the promotion of the Bengal Provincial Congress Committee. In 1937, he furtively married to Emilie Schenkl (daughter of an Austrian veterinarian) in Austria.

He selected as the All India Youth Congress President as well as Bengal State Congress Secretary. He also became the Forward newspaper editor and worked as the CEO of the Municipal Corporation of Calcutta. Once he got tuberculosis when he was arrested.

In the year 1927, he was assigned as a general secretary of Congress party when he released from prison. For the independence of India, he had worked with the Pt. Jawaharlal Nehru. In the case of civil disobedience, he once more arrested and went to jail.

He had planned the Forward Bloc on 22nd of June in the year 1939 to consolidate with the left political career. Muthuramalingam Thevar was his big political supporter who had arranged a huge rally during Subhash Chandra Bose’s visit to the Madurai on the 6th of September.

From 1941 to 1943, he had lived in Berlin. He led the Azad Hind Fauj through his eminent quotation like “Give me blood, and I shall give you freedom!”. In his speech on the 6th of July in the year 1944, he said Mahatma Gandhi the “Father of the Nation” which was broadcasted by the Singapore Azad Hind Radio.

His other famous quote was “Dilli Chalo” to encourage the INA armies. “Jai Hind”, “Glory to India!” was an additional slogan generally used by him which was later accepted by the Indian Government and Indian Armed Forces.


Japanese Prime Minister (Shinzo Abe) on his visit to Subhash Chandra Bose’s memorial hall in Kolkata on 23rd of August in 2007 said that the Japanese are extremely motivated by the strong will of the Bose in order to lead the independence movement in India from the British rule. He is a great personality and cherished name in Japan. 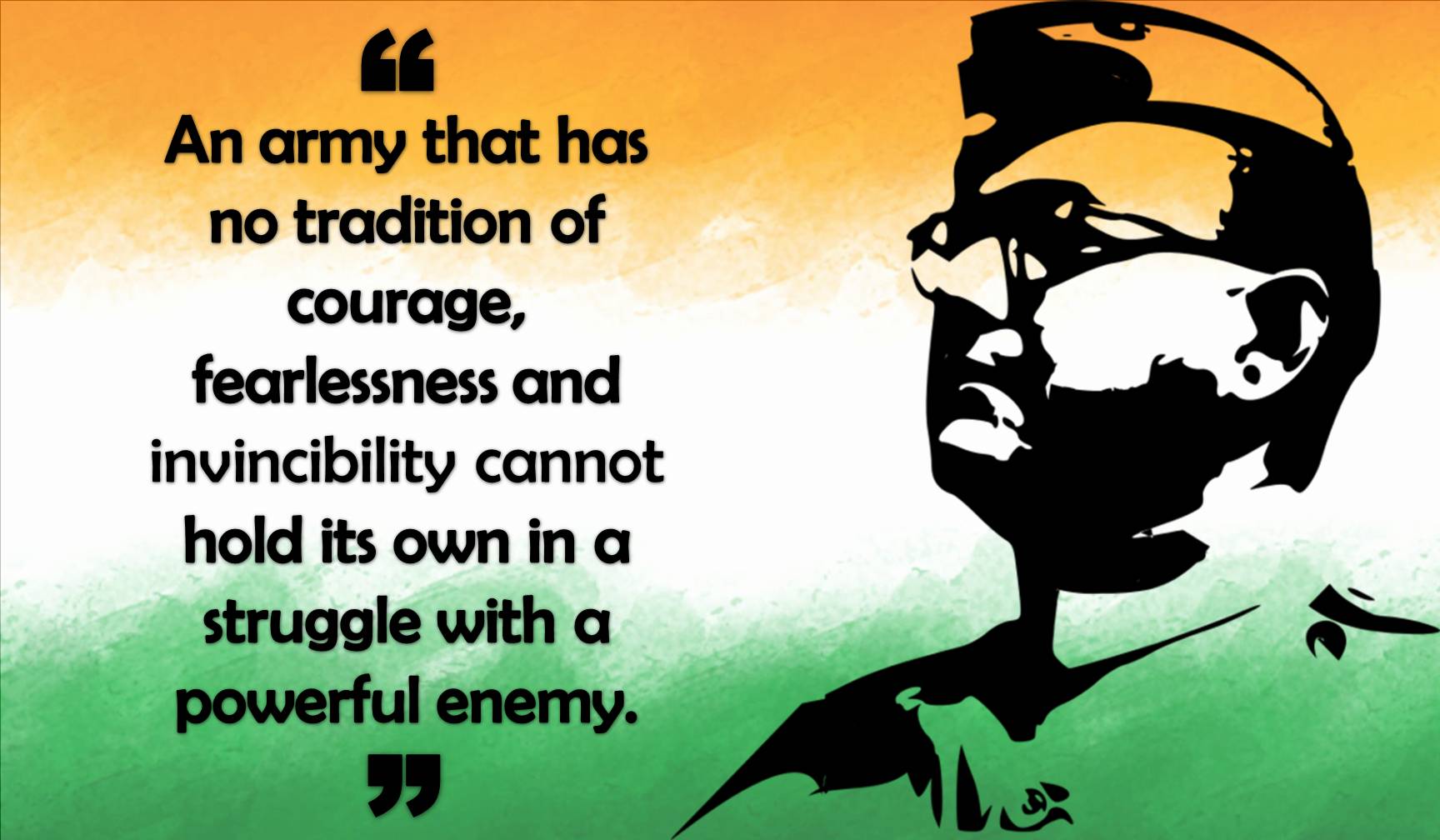 “Freedom is not given, it is taken”.

“One individual may die for an idea; but that idea will, after his death, incarnate itself in a thousand lives. That is how the wheel of evolution moves on and the ideas and dreams of one nation are bequeathed to the next”.

“You give me your blood and I will give you Independence!”.

“No real change in history has ever been achieved by discussions”.

“Soldiers who always remain faithful to their nation, who are always prepared to sacrifice their lives, are invincible”.

“Forget not that the grossest crime is to compromise with injustice and wrong. Remember the eternal law: you must give if you want to get”.