ANTI LEPROSY DAY 2020:- Anti Leprosy Day (Martyrdom Day of Mahatma Gandhi) 2020 will be celebrated all over India at Thursday, on 30th of January. 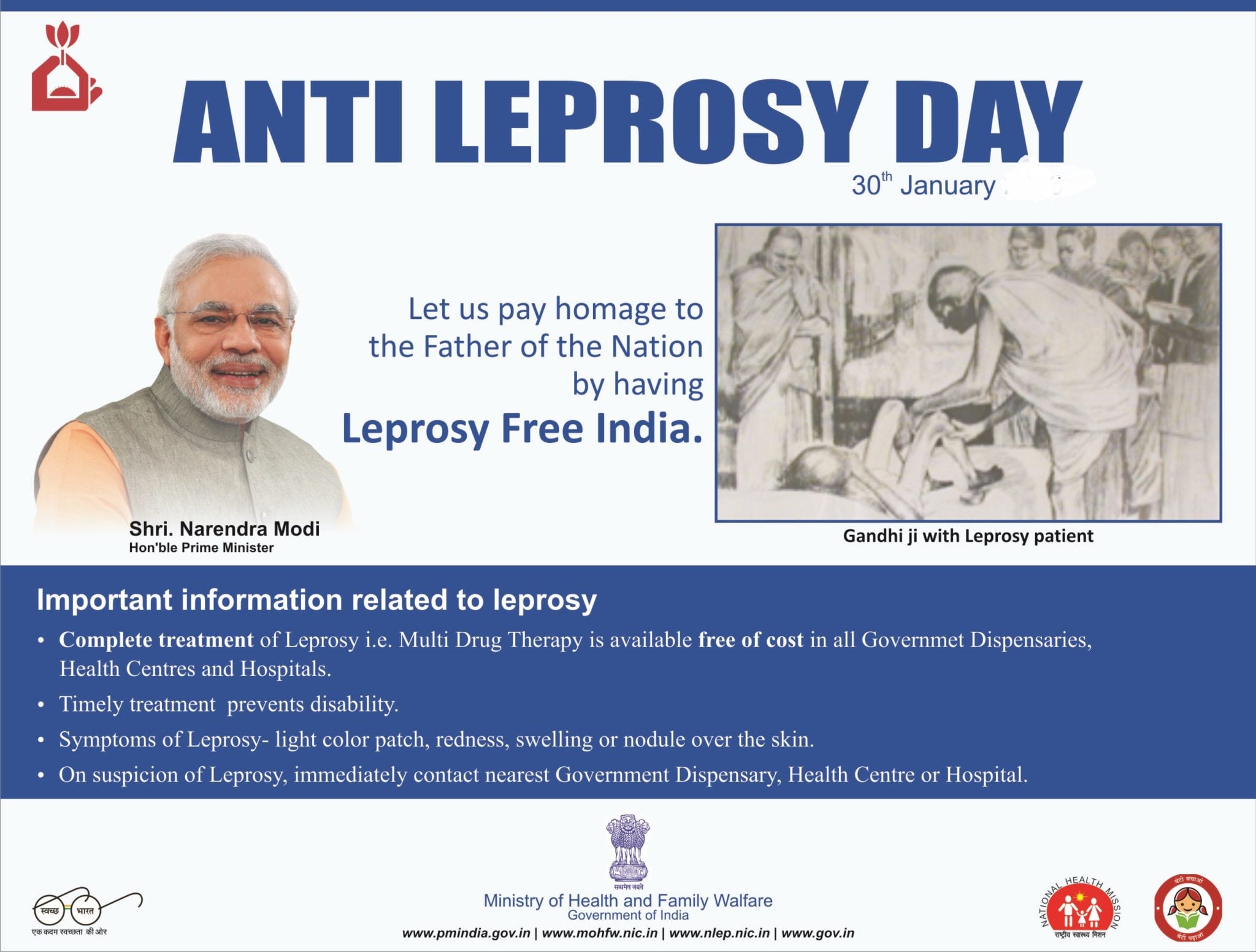 What is special on Anti-Leprosy Day 2020

On this occasion, a campaign named as the ‘Sparsh’ Leprosy Awareness Campaign, is being organized in all the Gramsabhas throughout the country by Central Leprosy Division, Directorate General of Health Services Ministry of Health and Family Welfare.

Free of cost multidrug therapy is available at all government dispensaries, health centers, and hospitals to provide complete treatment to leprosy-affected people.

30th January, the Martyrdom Day of the great person Gandhi Ji, is celebrated every year as the Anti Leprosy Day all over India in order to re-memorize his selfless efforts and care for the people affected by the infectious disease leprosy (also known as the Hansen’s disease).

It is celebrated to understand the real need to fight against leprosy. Anti-Leprosy Day campaign is celebrated in the school’s premises by showing the presentation as well as a movie to the students to aware them towards the much infectious disease Leprosy.

Anyone can be affected by this disease, so the day is celebrated to make aware the people about the scientific reasons of leprosy as well as its medical cures. It would be celebrated on the same day at the 30th of January in the year 2014 in order focusing on the attention of people and their awareness about this air-borne disease.

The day is also celebrated in the memory of Mahatma Gandhi who had tried very much for the eradication of leprosy. Several programmes are organized at this day all across India to share the message with people to fight against leprosy and let them know that the disease is completely curable.

According to the report it has been noted that there is a mark reduction in the disease rate as the Government of India has made available the multi-drug Leprosy treatment (NLEP-National Leprosy Eradication Program) free of cost at all government health centers all over India.

Leprosy is the oldest recorded diseases in the world which is an infectious chronic disease which targets affecting the nervous system (especially the nerves of the hands, feet, and face). The diseased patients were nursed by the Mahatma Gandhi Ji at the Sabarmati ashram.

A free check-up camp is organized at the anti-leprosy day celebration for the leprosy patients at each health centers which effectively changes the attitudes of people towards the disease.

It is a disease caused by the bacteria (Mycobacterium large), it is not the hereditary disease, so it is fully curable by the regular and adequate treatment which is very necessary to cure the disease and prevent its disabilities.

The Government of India has made a plan to completely eradicate it from India by the distant goal named Leprosy Elimination Target. Variety of leprosy control activities has been launched by the World Health Organization for further reducing the disease worldwide.

The celebration of the day targets to aware people about disease myths such as it is not spread by simply touching the affected person.