Gandhi Jayanti:- The celebration of Mahatma Gandhi’s Birthday will be observed all over India on 2 October. A great leader, Mahatma Gandhi, was born in 1869 in Porbandar, Gujarat.

He was also known as the “Father of the Nation”. He is known for his unforgettable contribution to the fight for freedom. His goal was to build a new society that behaved non-violently and honestly. Its members should be treated equally regardless of gender. , Religion, color, or caste maybe.


Gandhi not only helped India fight the British against independence but also led a simple and just life for which he is often worshiped. Gandhi’s youth was more ordinary and he became a great man during his lifetime. This is one of the main reasons why Gandhi is persecuted by millions of people because he proved that it is possible to become a great soul in his life if they have the will.

How is the birthday of Mahatma Gandhi celebrated in India?

The Indians celebrate Mahatma Gandhi’s birthday every year on October 2 with the following events:

People in many places in India, such as schools and colleges, sang the famous Bapu devotional song “Raghupati Raghava Raja Ram”.

People watched movies and read books about the accomplishments and deeds of Mahatma Gandhi’s life.

Garlands with beautiful flowers are placed by the people on the statues of Mahatma Gandhi throughout India.

Gandhi Ji was born on October 2, 1869, in Porbandar, a small town in Gujarat.

In his early years, Gandhi was deeply influenced by the stories of Shravana and Harish Chandra, which reflected the importance of the truth. Through these stories and his personal experiences, he understood that truth and love belong to the highest values. Mohandas married Kasturba Makhanji at the age of thirteen.


Gandhi then revealed that marriage at this age did not matter to him and that he was happy and excited not to wear new clothes. But over the days her feelings became pleasurable for her, which he later confessed with regret in his autobiography. Gandhi also confessed that because of his hesitant attitude towards his new and young wife, he could no longer concentrate on school.

After his family moved to Rajkot, a nine-year-old Gandhi was enrolled at a local school where he studied the basics of arithmetic, history, geography, and languages. At the age of 11, he attended a high school in Rajkot. He lost a school year between the two years because of his marriage, but later joined the school and eventually completed his studies.

He then left Samaldas College in Bhavnagar state after joining in 1888. Later, a friend of the family, Mavji Dave Joshiji, Gandhi, advised in London to sue. Gandhi was enthusiastic about the idea and was able to convince his mother and wife by bowing to them that he would forgo meat and sex in London. Assisted by his brother, Gandhi went to London and went the Inner Temple to practice law.

During his stay in London Gandhi joined a vegetarian society and was soon introduced by some of his vegetarian friends in the Bhagavad Gita. The content of the Bhagavad Gita should later have a significant impact on his life. He returned to India after being called from the Inner Temple to the bar.

Mahatma Gandhi was very simple and his thing was very high he also gives this example to everyone, just to live and think to make one look great. It was a great way of life for Gandhi.

He was totally against dependencies like smoking, drinking, and non-vegetarianism.

Non-violence means not participating in the use of physical force to achieve a goal. For some, the philosophy of non-violence is rooted in the simple belief that God is harmless. Lord Mahavira was the torchbearer of “ahimsa” and introduced the word to the world, applying the concept to his own life. Nonviolence also has believers who accept the need for nonviolence as a means of achieving political and social change. Nonviolence is a philosophy, a principle, and a practice.

Gandhi Ji was the great legend of truth and non-violence. He introduced a major movement in India, the Quit India Movement.

He initiated the “Satyagraha” (nonviolence) movement in the struggle for Indian freedoms. India has the most important day, Independence Day, coming from Gandhi Ji to India. He played a very important role in securing India’s independence from British rule.

He has proved to the world that freedom can be achieved through total nonviolence.

Any type of organization is closed that day and is granted throughout the country.

The legacy of Mahatma Gandhi

Mahatma Gandhi proposed the acceptance and practice of truth, non-violence, vegetarianism, Brahmacharya (celibacy), simplicity and faith in God. Although he will always be remembered as the man who fought for India’s independence, his greatest legacy is what he used to fight the British. These methods have inspired many other world leaders in their fight against injustice. His statues are set up around the world and he is considered the most famous personality in Indian history.

Contribution of Gandhi’s ideology to the world

Several ongoing developments around the world indicate a growing interest in a non-violent alternative to express their views. The people involved in these developments know the name and philosophy of Mahatma Gandhi. On the other hand, they promote the values and principles that he defended.

Mahatma Gandhi’s contribution to creating peace and non-violence in this world is unprecedented. His teachings should be promoted to resolve current conflicts, avoid violence and find a peaceful solution to all small and big problems, to make this world a better place to live.

3. “Be congruent, be authentic, be your true self.” ― Mahatma Gandhi

4. “Earth provides enough to satisfy every man’s needs, but not every man’s greed.” ― Mahatma Gandhi

5. “Happiness is when what you think, what you say, and what you do are in harmony.” ― Mahatma Gandhi

1. “An ounce of patience is worth more than a tonne of preaching.”

4. “Without action, you aren’t going anywhere.”

2. The best way to find yourself is to lose yourself in the service of others. Happy Gandhi Jayanti 2022

3. You must not lose faith in humanity. Humanity is an ocean if a few drops of the ocean are dirty, the ocean does not become dirty. Happy Gandhi Jayanti 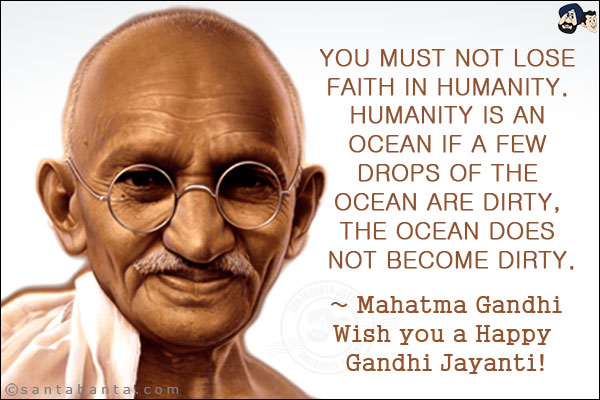 4. Let’s remember the Mahatma who shook the world in a gentle way, Wishing you a Happy Gandhi Jayanti.