Doctor Quotes and Sayings:- In India, National Doctors’ Day is celebrated on July 1st all across India to honor the legendary physician and the second Chief Minister of West Bengal, Dr. Bidhan Chandra Roy. He was born on July 1, 1882, and died on the same date in 1962, aged 80 years.

Later he became the Indian National Congress leader and then Chief Minister of West Bengal. . Behind his name, Dr. B. C. Roy National Award was instituted in the year 1976 to pay honor, respect, and tribute.

The staff of the healthcare organizations organizes a variety of events and activities for the campaign celebration.

At a discussion program, medical professionals will discuss topics such as health check-ups, cures, prevention, diagnosis, and proper treatment.

For better and healthier social development, doctors rotate through the community to provide medical services.

It is a day to say their vote of thanks for their love, affection, and priceless care of their patients.

Below you will find our collection of inspirational, wise, and humorous old doctor quotes, doctor sayings, and doctor proverbs, collected over the years from a variety of sources.

“Our profession is the only one which works unceasingly to annihilate itself.” 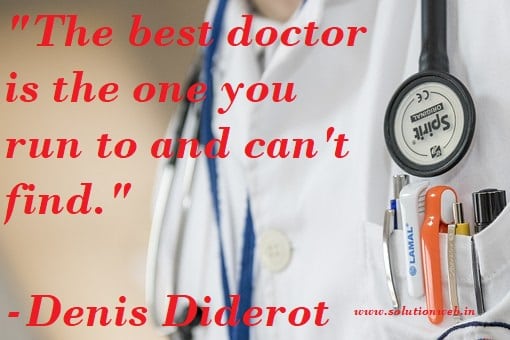 “The best doctor is the one you run to and can’t find.”

“My doctor is wonderful. Once when I couldn’t afford an operation, he touched up the X-rays.”

“My doctor is nice; every time I see him, I’m ashamed of what I think of doctors in general.”

“The doctor of the future will give no medicine but will interest his patients in the care of the human frame, in diet and in the cause and prevention of disease.”

“We are in the age of M.D., medical darkness, which seeks legislative protection from the light.”

“The man who doctors himself with the aid of medical books, runs the risk of dying of a typographical error.”

“Doctors think a lot of patients are cured who have simply quit in disgust.”

“Disease increases in proportion to the increase in the number of doctors in a place.”

“You may not be able to read a doctor’s handwriting and prescription, but you’ll notice his bills are neatly typewritten.” 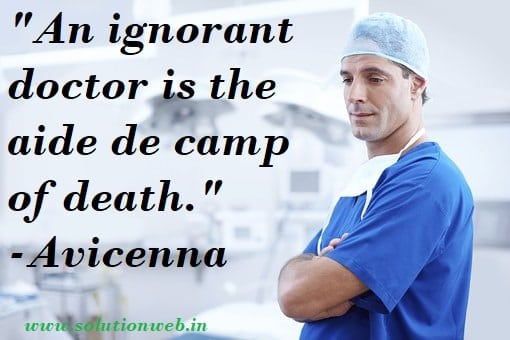 “An ignorant doctor is the aide de camp of death.”

“You need a good bedside manner with doctors or you will get nowhere.”

“Doctors always think anybody doing something they aren’t is a quack; also they think all patients are idiots.”

“You can’t judge the ability of a doctor by the amount of praise the undertakers give him.”

“My doctor told me I shouldn’t work out until I’m in better shape. I told him, All right; don’t send me a bill until I pay you.”

“A great doctor kills more people than a great general.”

“Surgeons must be very careful when they take the knife! Underneath their fine incisions. Stirs the Culprit Life!”

“Though the doctors treated him, let his blood, and gave him medications to drink, he nevertheless recovered.”

“Doctors don’t seem to realize that most of us are perfectly content not having to visualize ourselves as animated bags of skin filled with obscene glop.”

“A doctor whose breath smells has no right to medical opinion.”

“Though fancy may be the patient’s complaint, necessity is often the doctor’s.”

“My intent was to carry out my duty as a doctor, to end their suffering. Unfortunately, that entailed, in their cases, ending of the life.”

“The doctor is not unfrequently death’s pilot fish.”

“It is not much trouble to doctor sick folks, but to doctor healthy ones is troublesome.”

“The best doctors in the world are Doctor Diet, Doctor Quiet, and Doctor Merryman.”

“I know of nothing more laughable than a doctor who does not die of old age.”

“People pay the doctor for his trouble; for his kindness they still remain in his debt.”

“A wealthy doctor who can help a poor man, and will not without a fee, has less sense of humanity than a poor ruffian, who kills a rich man to supply his necessities.”

“I wondher why ye can always read a doctor’s bill an’ ye niver can read his purscription.”